Book Review: A Book of Spirits and Thieves by Morghan Rhodes

Crystal Hatcher is a high school senior who thought her biggest problem—aside from dealing with anger at her absentee father—was making it to graduation. But an ancient book arrives on the doorstep of her family's bookshop, The Speckled Muse, and Crystal soon discovers that she couldn't be more wrong. When her sister Becca falls into a coma after touching the book, Crystal is thrust into a world of secret societies, mysteries, and myth that she never knew existed.

Meanwhile, her sister Becca Hatcher awakes in ancient Mytica. None can see her save for Maddox, the boy with a mysterious power over shadows. Convinced he is the key, Becca embarks on a dangerous quest to return home... 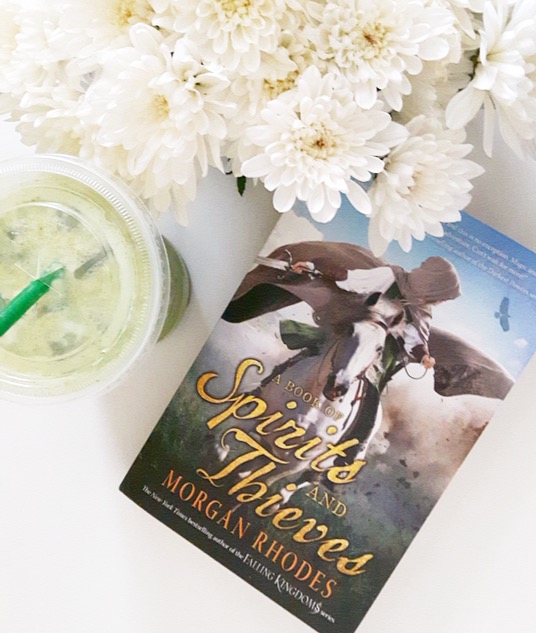 This is the first instalment in a spin-off series of Morghan Rhodes' Falling Kingdoms series, which I maintain is one of the most underrated young adult book series. It doesn't get enough recognition, and I can't think why—the series is truly absorbing and unpredictable, and it's riveting to see how all the character's paths intertwine.

The synchronicity between my life and this book was honestly astounding. I read this towards the end of April—nearly the exact time that the events in the book were taking place! It was a fast-paced read with Rhodes' signature twists and turns that kept you guessing. The romance in this book took a backseat in favour of themes of family and sisterhood, which was a welcome change!

The book is set in present-day Toronto (which incidentally is on my travel bucket list)! I'm Canadian, and it was so so refreshing to read a fantasy/adventure novel set in Canada! Locations both real and invented were incorporated throughout the story: the University of Toronto campus was described in beautiful detail, and I want The Speckled Muse bookshop to be real!!

My absolute favourite type of novel is low fantasy: magic that is grounded in the real world. Some well-known examples are Cassandra Clare's Mortal Instruments series and Rick Riordan's Percy Jackson novels. There is something about the discovery of a magical realm within your own world that captivates me, and A Book of Spirits and Thieves fit the bill perfectly. A majority of it was set in modern-day Toronto, and I enjoyed reading about Crystal's discovery and eventual acceptance of magic in her world!

I did get the sense that the book was not given Rhodes' usual measure of care, as it could have done with another round of edits in my opinion. Wording was sometimes repetitive, with the same phrase used multiple times in a matter of pages. In addition, the romance between two of the characters came across as slightly rushed and under-developed, and didn't hold a candle to the novel's main romantic pairing. That said, this was an immensely enjoyable read. Those who enjoy fantasy grounded in modern life will devour this quick-paced read from Morghan Rhodes.
Labels: book review Falling Kingdoms low fantasy Morgan Rhodes Romance series Young adult