Series Review: All for the Game by Nora Sakavic (Spoiler Free!)

Don't look back, don't slow down, and don't trust anyone. Be anyone but himself, and never be anyone for too long.

These are the instructions Neil Josten lives by. For nineteen years, they've kept him safe from discovery—until now.

When Neil is approached by David Wymack, coach of the Palmetto State Foxes, Neil wants nothing more than to accept his invitation to play Exy at the university level. But Neil's father is a notorious crime lord who will stop at nothing to hunt Neil down, and Neil has already lingered in one place for too long.

Against all instinct, Neil signs as the newest member of the Foxes. His secrets threaten to tear the team apart, along with his fear that a teammate he knows from his life before will recognize him. But Neil's been running for too long, and he's about to find that there are some things he can't run away from. 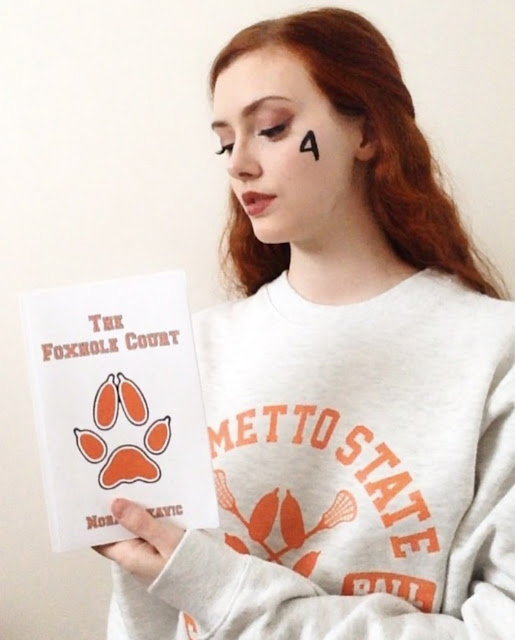 It's been quite some time since a book series caught me up so thoroughly in its world. (The last series to do so was Captive Prince, which I am still not over.)

I finished this series on a Monday evening, then stayed up until 1 am scrolling through the author's tumblr page where Nora answers questions on the books and characters. I ordered a Foxhole Court sweatshirt. I read the Exy rules and regulations and spent hours putting together a playlist and watching fan videos on Youtube. These books have taken over my soul. While reading I laughed, I cried, I cursed the stupid choices of the characters and I hungered for more.

Part of what I think made these books so good was their fast pace. From the beginning, Neil has secrets and you want to know them. Well, get in line with all the rest of his teammates. Neil holds his cards close to his chest—or tries to. He is one of the sassiest, snarkiest characters I have come across, and I love that he is always running his mouth when people insult or threaten his teammates. He goes through an amazing character arc that seems gradual and natural, marked by relapses of broken trust and traumatic incidents, but seeing how his character shifted from page one to the end of the last book was amazing.

The Foxes on the whole had such an interesting dynamic. They are the underdogs who clawed their way to victory, but in the beginning they were so far from a cohesive unit that you wondered whether they could ever be fixed. The premise of Wymack's vision for the Foxes—a group of athletes from broken homes who are given a second chance—was so interesting, especially seeing how utterly it failed in the beginning. But throughout the books it was so rewarding to see these characters grow and interact and eventually learn to be a family.

While the entire Palmetto Exy team is phenomenal, I definitely had my favourites. Namely Renee, Andrew, and Nicky. Nicky is a literal ray of sunshine whose loud, boisterous personality belies the pain in his past. He deserves the world. I would definitely have liked to learn more about his backstory and his fiancé Erik, but the story wouldn't have allowed for it within the constraints of Neil's narration. Renee is another of my favourites. She was so sweet, and I enjoyed reading her reactions to her teammates' actions. Usually the voice of calm and reason, Renee was a character I found really intriguing, especially in light of her friendship with Andrew.

Andrew Joseph Minyard was a character who would definitely terrify me in real life, yet here I am fangirling over how much I love his character. He's a five foot nothing manic depressive who likes knives and cares about nothing. (If you've read the books, you see what I did there). His motivations were so interesting as you came to understand them, and the things he endured made his perspective and actions that much more layered and intricate. Andrew's pattern of speech was so utterly unique, and I love how Nora captured his character. He felt the most real, but also the furthest from anything I've ever known before. I love the character trope of the stoic person who seems utterly blank and unapproachable, but would do anything for the people he cares about.

The romance in this series is the slowest slow burn to ever burn, but it is so worth it. It doesn't help that Neil is the densest character in existence when it comes to romantic advances, though it definitely made for some interesting interactions when other characters did express interest in him. Neil's sexuality was an incredibly important part of his character, being demisexual, and I wish Nora would have gone into it a bit more (or used the word demisexual in-text rather than just on her tumblr after the fact). When the romance finally does play out, everything begins to make sense. So many previous scenes are given new meaning, and those small shifts in understanding are part of why I want to reread this series with all the knowledge of how the story turns out.
I'm doing my best to keep this review spoiler-free (because not enough people read these books!) but I will say that the romance was so compelling and intriguing. Expressions of affection between Neil and his love interest were unconventional—they aren't the type for I love you's—but their interactions were made all the more meaningful because of it. Casual touches and turns of phrase were weighted with meaning that you were clamouring to decipher. It's safe to say that I came out of reading The Kings Men with a new favourite ship (on par with Laurent x Damen and Patrochilles)!

The writing style was very frank. You'll find no purple prose or lyrical lines in Nora's writing, but it is made better because of it—the books deal with incredibly difficult issues (torture, rape, drug and alcohol abuse to name a few), so during certain scenes it was a mercy that they weren't given drawn-out description. That said, I feel that the difficult scenes were definitely given the necessary weight. They didn't feel cheapened or exaggerated—just very, very real. There are definitely some intense moments where I found myself in utter shock and horror. But the characters address these issues and learn to support one another, and in the end become a family because of it.

The All for the Game series deals with a lot of difficult topics. Its core message of home and family never overshadows the grit of the characters' lives, but in spite of it these books are incredibly funny and heartwarming at the same time. I loved seeing the characters grow as our understanding of them grew, and seeing hope blossom where before there was none. I definitely see myself rereading this series in the near future. Until then,

This is the moment you stop being the rabbit.