I recently finished reading the All for the Game series by Nora Sakavic and it has completely taken over my thoughts lately. So of course I had to make some aesthetic moodboards for the series and out together a playlist! (I also ordered a Palmetto State Foxes sweatshirt online because I am THAT in love with these books!)

Spoilers for the All for the Game series to follow, you have been warned!

You can find the playlist here. 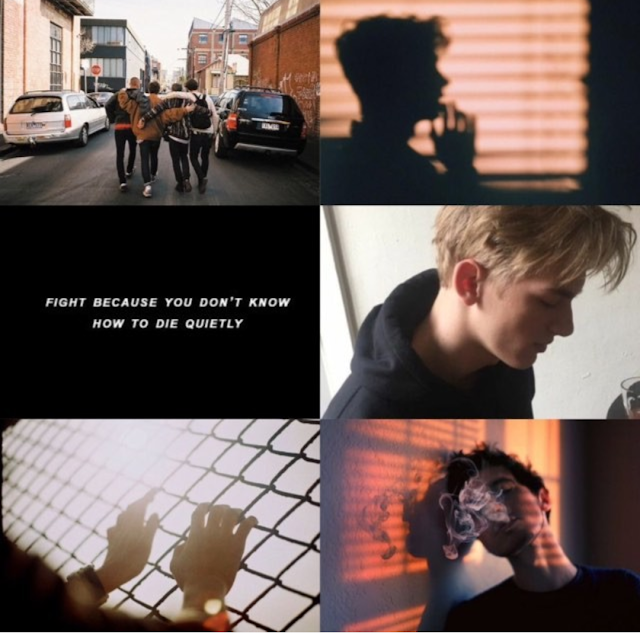 Who Are You, Really? by Mikky Ekko

This song, apart from sounding totally badass and mysterious (I would 100% nominate it for the opening credits song if The Foxhole Court is ever made into a movie!) speaks on so many levels to Neil's perspective at the beginning of the series. He is nothing, has nothing—to live for or fight for. But when he joins the team at Palmetto State, he begins to question why he's still running when he's found something potentially worth sacrificing for.

Game of Survival by Ruelle

Are we the hunters
Or are we the prey?
There's no surrender
And there's no escape
This is a wild game of survival

The words of this song speak mostly to the opposition between the Ravens and the Foxes. Riko's team is cutthroat and cult-like, and while Exy is a violent sport to begin with, Riko's players take it to a new level.

Carry Your Throne by Jon Bellion

Two crowns and a gold cup
And they're coming for the throne, love
But if your heart is a dog fight
Then I'm ready to go to war like

There is a royal court analogy at play in the series surrounding the sport of Exy. From the 'armor' the players wear during Exy matches, to Castle Evermore being home to the Ravens. Riko calls himself the king of exy, and the players are frequently referred to in terms of chess pieces. This song calls to mind those court parallels (as well as expressing how all the Foxes—especially Andrew—are willing to support, protect, and fight for their own). 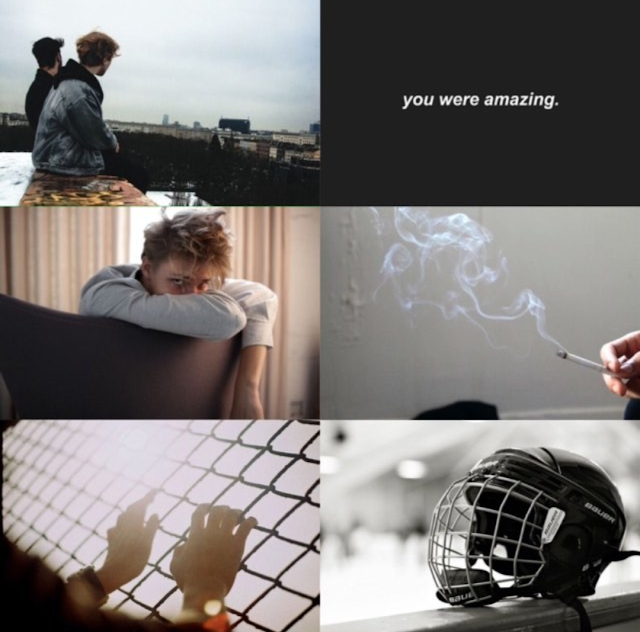 Glory and Gore by Lorde

I see a lot of meaning in this song with regards to the Foxhole court, so I'm going to break it down in a bit more detail.

To me, this stanza almost immediately brings to mind Kevin. It may be a superficial observation but a) he has a habit of getting himself drunk at inopportune moments, and b) he does take a few punches, both from the Ravens and his own team members (*cough* Andrew).

Now we're in the ring
And we're coming for blood

These lines are just spine-chilling especially in relation to the Foxes clawing their way up through the ranks of Exy teams to finally face the Ravens during the spring competitions. They also speak to the rage Neil's teammates must have felt at what he suffered at the hands of Riko, and express how the Foxes are unwilling to take any more hits—this time they're set on victory.

Again, superficial, but I like these lines because they speak to the graphic brutality of some scenes in the book (I mean, explicit torture is not something you come across everyday in your average New Adult novel), as well as the role of the press and media in the series. Having their lives under scrutiny because of some of their teammates takes a measure of privacy from the Foxes, but they gain recognition, too. It was partially because of the press that Neil was able to convince himself not to run from Palmetto State—because as long as their team was in the spotlight, Riko couldn't get to him (or so he thinks!).

Savages by Marina and the Diamonds

Underneath it all, we're just savages
Hidden beneath shirts, ties, and marriages
How can we expect anything at all
We're just animals, still learning how to crawl
All the hate coming out from a generation
Who got everything and nothing
Guided by temptation

This song reminds me most of the Ravens. They are the Foxes' fiercest rivals because of the bad blood between Riko and Kevin, and the court itself is as nightmarish as the players who inhabit it. The final three lines draw a parallel to Neil's cutting words to Riko during their encounter in the banquet in book two—Neil can never keep his mouth shut around Riko, always jumping at the chance to insult him. But Riko truly was given everything and nothing. Overlooked by his father and brother, he made something of himself in the only place he could—on an Exy court. Even if his own savage instincts destroy him in the end.

Heathens by Twenty One Pilots

All my friends are heathens, take it slow
Wait for them to ask you who you know
Please don't make any sudden moves
You don't know the half of the abuse

You can't have a book about fictional sports and mafia wars without including this song on the playlist. (Ok, maybe that's a little specific, but it fits so well!) These lines in particular address the crime syndicate plotlines surrounding the Moriyamas and Wesninskis, as well as the cult-like hazing of the Ravens at Edgar Allen university. It's a reminder that while the book may have bright covers and themes like family and college, there is much darker content that lurks between the pages and raises the stakes. 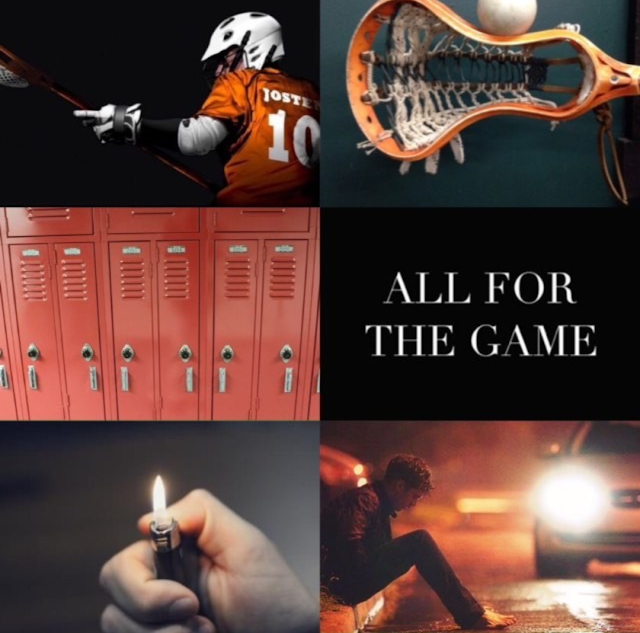 This song makes me think of Andrew's psychosis—how it is perceived by others, and how it causes him to lash out or alternately act apathetic and removed. On the one hand, Andrew is capable of extreme disinterest, but in the same moment he can strike with extreme violence. His protectiveness towards his chosen family is something that really endears him to me as a character, because it's nice to know that there are some things even he can't shut out completely.

This song is undeniably Andreil. It makes me thing of the aspects of their relationship once Andrew's protection of Neil is stripped away—what remains is two people that need each other more than either is willing to admit, whose relationship is at times radically unstable because of their communication and which isn't always as clear cut as others make it out to be. But in the end, Neil falls for Andrew because he gave him a key and asked him to stay, which was more permanent than anything he'd ever been offered before. And Andrew falls for Neil because in spite of his claims that Neil is infuriating, Neil respects all his boundaries and gives him a reason to matter.

Let's Hurt Tonight by One Republic

I saw this song mentioned on the author, Nora Sakavic's tumblr page and I had to check it out. The words seem serious but they belie the hopeful tone of the song, similar to how Andrew's denial of his feelings for Neil eventually give way to the reader's knowledge of how much Andrew truly cares for Neil. Outside of that, the book series as a whole is about hurts and healing. All of the Foxes come from broken homes, but they create a family of their own and call it home. They all endure and overcome so much over the progression of the story that I was nearly brought to tears by the final scenes of the last novel. Something that stuck with me was Neil's realization that as much dedication as he poured into Exy, the sport could never love him back. Neil came to find things worth staying for. He stopped running and learned that though it might hurt, it's something to hold on to.

Lover, Please Stay by Nothing but Thieves

This is a slower song and recommended to me for this playlist by a friend of mine over on bookstagram. (Thank you, Farrah!) The lyrics speak to the dynamics of Neil and Andrew's relationship, namely how they are both what the other needs. The line and I see you is reminiscent of part of the bonus material Nora includes on her tumblr, a bit of Andrew's perspective:

"This is not something he signed up for, this is not okay because this is too raw and too real and Neil can see right through him and his too-fierce don’t look at me like that is only answered by a too-calm too-measured too-pointed I see you."

On the whole, the song reminds me of Andrew's silent support, sitting on the rooftop of Fox Tower with Neil, or Neil trying to understand Andrew's boundaries to make sure he doesn't cross them.

Believer by One Republic

Last things last
By the grace of the fire and the flames
You're the face of the future, the blood in my veins

This song just speaks to how the Foxes overcome their struggles and come together as a cohesive team through Neil's presence. At the end of his story, when he looks around and realizes he has found something he can't—won't—run away from, it is because of his teammates and because of Andrew. The Foxes have become his future, his family, no matter what may come.

I saw on Nora Sakavic's tumblr page that this is the song she chose as Neil and Andrew's ringtone. I agree with Neil's assessment that it doesn't sound like the kind of music Andrew would willingly subject himself to, but Nora said it so it's official for better or for worse!

The lyrics of the song are definitely applicable to Neil's story, though. The line about being a key in need of turning reminds me of how touched Neil was at receiving the keys to the Exy court, and later to the twins' house in Colombia. The lines about secrets and promises also tie in closely to the story's main themes, as well as Neil's crushing fear of being discovered by his past—and how he goes to Andrew for safety.