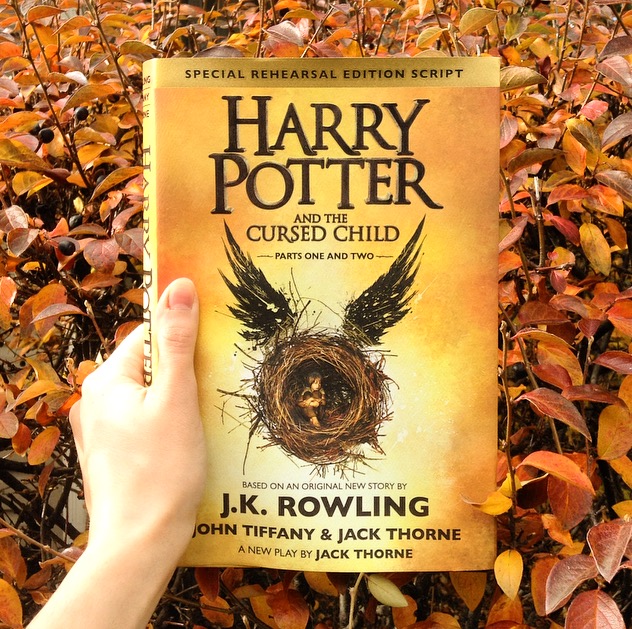 I got this book the day it was released, and you can read about my experience at a Harry Potter-themed event celebrating this release here.

It’s taken me quite some time to finish reading this, as I was originally reading it alongside my family as we used to do when I was a child. But last week, after about a month without reading it at all, I decided I  was just going to finish it myself.  This book is in script format, making it a very quick read.

Overall, the general premise of this book is great. I don’t imagine that there is a Harry Potter fan out there who wouldn’t love to read about the Next Generation kids attending Hogwarts. The fault, at least in my perspective, lay in the plot and characterization.

The entire plot of the play revolves around a timeturner. While relatively logical at first, the storyline becomes more and more implausible as the play progresses. No spoilers, for those who have not yet read the book, but there are many laughable moments that are entirely unlikely, even within the wizarding world.

The characters were very poorly dealt with, in my opinion. The play changes many things that JKR has mentioned following the end of the series. For example, Rowling mentions in an interview that following Hogwarts, Hermione is involved in the Department of Magical Law Enforcement, and that Kingsley Shacklebolt became the permanent Minister of Magic. However, in Harry Potter and the Cursed Child, Hermione is Minister. I can understand why the playwrights may have wanted a woman as Minister, and I’m all for female empowerment, but from my perspective this was disrespectful towards JKR’s version of events following Harry Potter and the Deathly Hallows.

Aside from Hermione, the play also does a number on the other two members of the golden trio: Harry becomes a ‘stone-cold Ministry man’ who is apparently incapable of being a good father due to his own lack of father figure growing up. To me this is conpletely backwards—Harry had plenty of father figures to look up to. How about Sirius, Lupin, Hagrid, Mr. Weasley? Meanwhile, Ron’s character was reduced to bumbling comic relief.

One thing I enjoyed about the script was Scorpius’ character. The son of Draco Malfoy, Scorpius is an adorable geek who makes fast friends with Albus, Harry’s younger son. The dynamic between Albus and Scorpius was bordering on romantic, and there has been a big discussion about this among fans. Personally, I found their relationship akin to the brother-warrior bond of Parabatai in the Mortal Instruments series by Cassandra Clare, but there are many who feel that the writers should have let their relationship play out as romantic. There’s a big discussion about this among fans, a link to which can be found here.

Overall, this book just didn’t have the feel of a Harry Potter novel. The writing, the format, and the way familiar characters were treated just didn’t evoke the feeling of magic that I’d hoped for.

That said, if ever a performance of Harry Potter and the Cursed Child opens near me, I would definitely be interested to see how the script translates to the theater.


You can purchase a copy from Chapters, Amazon, or Barnes & Noble.