Film Review for Rogue One: A Star Wars Story

Rogue One follows Jyn Erso, a lone rebel with ties to the creator of the Death Star, who is called on for a mission that brings her face-to-face with her past. Alongside a ragtag group of rebels, Jyn must steal the Death Star plans in order to strike a blow against the Empire and rekindle hope for the rebellion. 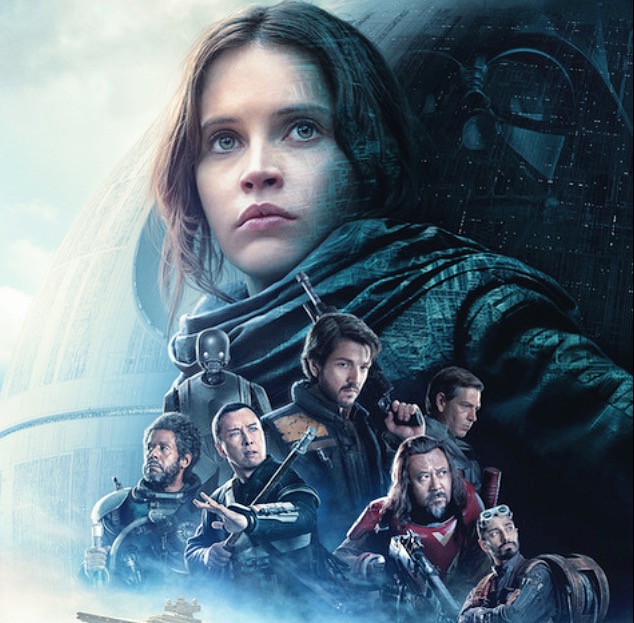 If you've seen my post on my favourite tv shows, you know that Star Wars is my thing. Rogue One did not disappoint. To preface this review, I want to say that had the ending been different, this would be my favourite Star Wars film, without a doubt. That said, in my opinion it was still one of the best.

Going into the theatre, I had two questions: one, would they have the opening crawl since this was a spin-off of the main saga? And two, how did the characters in this film factor in to the rest of the movies?

From the first few moments of the film, it was clear: this was Star Wars as you've never seen it before. As the words 'A long time ago in a galaxy far, far away....' appeared glowing blue against a backdrop of stars, I prepared for the burst of Star Wars theme music, the opening crawl... but instead it cut directly into the film. It was a specific choice made by the film creators, and it set the tone for the film–visually similar to the original series, but able to stand on its own.

The setting of the film took us to several new planets–Jedha, the spiritual planet from which kyber crystals were being plundered to power the Death Star, and Scarif, where the Imperial plans to the Death Star are kept. We also travelled back to Yavin IV, the rebel base from which the X-Wings embark on missions. It was cool to see familiar planets as well as those which were previously unexplored by the films.

Something I really enjoyed in this film was that there were no clear divisions between the 'good guys' and the 'bad guys'. The rebellion is morally ambivalent—issuing questionable orders to Cassian and putting him at odds with Jyn regarding their goals for the mission. We know the rebels are fighting against a corrupt empire, but the rebellion itself is corrupt at times.

As a character, we know quite a bit about Jyn simply from the flashback scenes: her father left the Empire to go into hiding with his wife and young Jyn, taking up moisture farming on a mountainous green planet. (Though why moisture farming is crucial on a non-desert planet, I'm not sure. In my opinion, this was the director's attempt to include an aspect of familiarity into Jyn's origins, as both she and Luke seem to have had a similar upbringing.) Throughtout the film, Jyn has somewhat of a redemption arc, beginning as a jaded rebel unwilling to get involved in a cause bigger than her, becoming one who inspired others to rebel in the hope of a better future for the galaxy.

Cassian Andor was another character with a redemption arc. We first see him shoot an informant when it seemed unlikely they would both escape, and he receives orders to kill Jyn's father, architect of the Death Star. However, he goes against these orders and later even amasses a group of rebels who regret actions they've taken in the name of the rebellion in an effort to make things right.

I felt that there was definite romantic interest between Jyn and Cassian–at first, the two are forced to collaborate but remain distrustful of each other. As the film progresses, we see how they support each other, and their small glances seem to suggest their feelings for each other. Cassian is always thinking of Jyn, pulling her out of Saw Gerrerra's crumbling fortress as Jedha collapses, holding her back when she wants to pursure Director Krennic to avenge her parents' deaths. However, we never see their relationship develop further, as Cassian and Jyn both perish in the destruction of Scarif. I think this tragic end was fitting–it would have felt inauthentic if the two were to confess their feelings while facing their imminent deaths.

The supporting characters were great, as well: Bodhi Rook, the Imperial pilot who defected to the rebellion, and whose loyalties were still uncertain in the beginning of the film. Churrut Imwe, the monk-like character who issues unrequested wisdom, capable of taking down several dozen stormtroopers with just a staff. Baze Malbus, friend and self-appointed guardian to Imwe, with heavy firepower and a deep sense of loyalty. I would have liked to learn more about Imwe's and Malbus' pasts, their lives before being caught up in the rebellion. K-2S0 was probably my favourite. The sassy droid is constantly butting heads with Jyn, offering comic relief with his snappy one-liners. Director Orson Krennic is an imperial officer with big ambitions who has a past with Jyn's family. His swooshy white cape was delightful and really evidenced the character's high opinion of himself, haha!

Rogue One definitely has nods to the other Star Wars films—one of my favourite moments was when K-2S0 begins to say, "I have a bad feeling about this!"—and there were some great appearances from familiar characters in the Star Wars universe. We see R2-D2 and C-3P0 for a brief moment as X-wings are taking off to join the fight on Scarif. Bail Organa makes an appearance. There is a mention of Syndulla (likely Hera Syndulla, pilot of the Ghost in Rebels, which incidentally made an appearance during the battle on Scarif!) over the intercom on the rebel base. Moff Tarkin also appears in all his CGI glory (which was a little cringe-y, but entertaining nonetheless) as does Princess Leia.

To answer my second question I stated at the beginning of this post: the characters aren't involved in the rest of the films. They all die, because while this is a movie about hope, it is also a film about war. It's about redemption, and being involved in a cause greater than yourself. To quote Hera Syndulla from Star Wars Rebels, "If all you do is fight for your own life, then your life is worth nothing."