Review: The Last of the Wine by Mary Renault

The Last of the Wine is a historical fiction novel set in Greece during the 5th century BC. It follows the life of the Athenian Alexias as he becomes pupil to Socrates,  fights in the Peloponessian wars, and competes in the Olympic games. 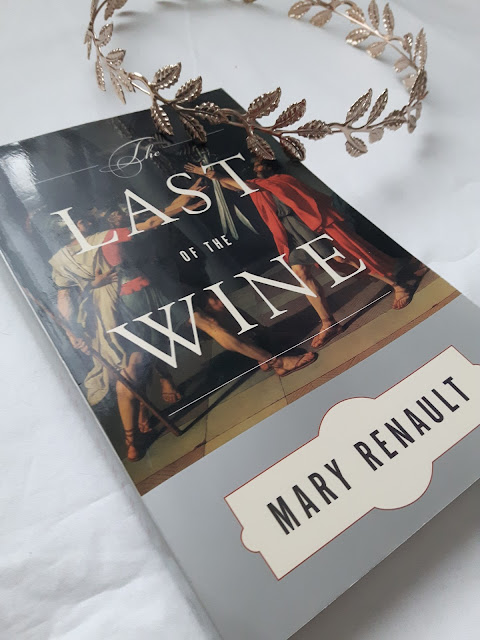 This was the first book of Renault's that I have read, and I can see how even today she is renowned as one of the world's greatest historical fiction writers. The story was very honest. It did not pretend at anything, yet was incredibly deep and moving. I felt Alexias' joys and pains as if they were my own, and came to love the same characters he himself did. The mood of the novel was extremely well developed--from the first page you had an idea of what to expect, which led to a sense of inevitability throughout the story. Some passages ached, and yet others made my heart soar.

Another aspect I loved was how Renault's writing allowed for you, the reader, to draw conclusions. Often times she would only hint at occurrences, making the revelations, when they came, all the more impactful.

The characters themselves seemed to breathe. I felt Alexias' joys and hurts as though they were my own. I loved who he loved, felt his anger and happiness and horror, however small. Alexias personifies the saying, "At the touch of love, everyone becomes a poet." His ruminations on love were particularly beautiful, and often I had to re-read paragraphs just to fully absorb the lyricism of the words.

The writing style was worlds away from what I was previously familiar with, but made you think about every sentence. This is not a novel to be read in one sitting, but to be read slowly and ruminated on. It forced you to question the meaning of democracy, of honour, of truth. I feel that I could read this novel a hundred times over and still find new meaning with the turn of every page.

The novel was extremely dense in history, but delightfully so. This is the first book I've read set in ancient Greece that so highly prizes historical accuracy! As a student of classics, it was utterly entrancing to read about all the historical figures (Socrates, Plato, Alcibiades, Xenophon, Critias etc.) from the point of view of Alexias.

This has become one of my favourite novels, one I look forward to rereading in years to come. I feel I will never again find a novel that so skilfully tells the tale of things lost and gained, of joys and sorrows, of those who bled and lived and loved.