Centuries ago, the epic poems of Homer would have been performed aloud to the acompaniment of lyre music, over the course of several evenings as the audience dined in the halls of ancient kings and lords.

It astonishes me that a work as ancient as Homer's Iliad could be so enduring. There are a multitude of varying translations of the tale, both in prose and poetic verse. Verse is, of course, how the epic would originally have been recited, so a translation such as Robert Fagles would likely have provided the most authentic experience.

Read on to hear about my own Odyssey through the words of Homer. 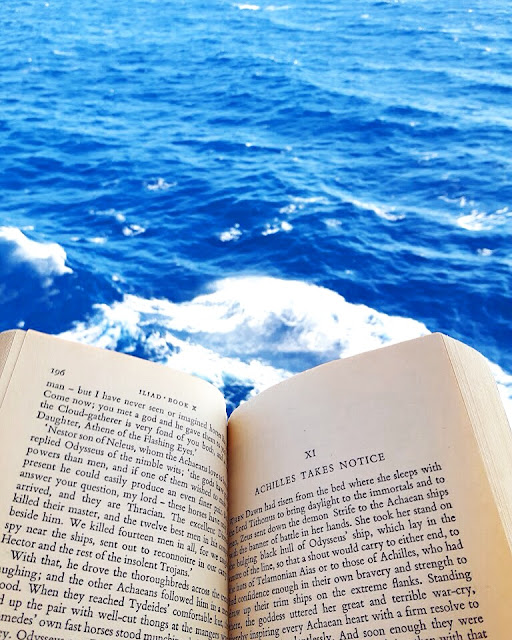 First, a little bit of background. I am a self-professed Greek Mythology nerd. I have loved the history and legends since I first learned of them in middle school. I have probably seen every movie set in Ancient Greece that you could think of. I read every novel I come across that takes place in the ancient world. However, this summer, a glaring whole in my reading repertoire became apparent to me: I had never read The Iliad. How could I have overlooked one of the oldest novel in civilization, much less one from an poet of my favourite historical time period?

I set out to remedy this inexcusable oversight immediately. The only translation I had on hand was E.V. Rieu's 1900s translation, written in prose. As mentioned previously, a verse translation would have been preferable, but now I have incentive to read the poem again in the future.

In brief, my thoughts on the Iliad were that it was as long as the Trojan war. Which is to say, pretty long.  Perhaps it was the translation, but I found the lines very repetitive. Every Achaean is 'the best', wears the shiniest armor, kills the most men. In each and every battle, those who were killed were predictably 'struck on the breast through the nipple', then their armour rang about them as they fell to the ground and night came over their eyes.

No joke, Homer probably repeats those exact phrases on nearly every page during battle scenes. After awhile, it got incredibly wearing, however I suppose the repetition does retain a certain kind of charm, reminiscent of children's rhymes.

So, repetition aside, Homer really likes names. You could write a baby naming book using the Iliad alone as a source. And every character you encounter has a backstory which they are all too pleased to recount, sometimes in the midst of a battlefield. The irony provided ample amusement as I read through scenes such as the moment when two enemies, upon having a long discussion (while surrounded by warring enemies, of course) discover they are old family friends, and decide that they must exchange armour right that minute as a show of friendship. To modern minds, this might seem ridiculous, but in Homer's time, xenoi or guest-friends were honoured relationships between guest and host that lasted for generations.

So I've discussed how ridiculous and unrealistic some battlefield occurrences are. Now onto the positive aspects.

At its core, The Iliad is a tale of mythical heroes during a time when gods walked among them. It provides no shortage of inspiring figures who come with their share of flaws.

Agamemnon, though he rules over the whole of the Achaean army, is nonetheless greedy and dishonest. Achilles, for his part, is fated to become the greatest hero of his age, but at the cost of his own life. He also has a habit of hugely overreacting to everything, and he has contemot for nearly everyone save for his friend (and lover) Patroclus.

While Homer does not explicitly state the nature of the relationship between Patroclus and Achilles, I am of the belief that no man would react as Achilles did to the death of someone he only considers his squire.

Plot-wise, the pacing was extremely drawn out. I found myself immensely enjoying the scenes at the Achaean camp or the arguements between the gids, however the battle scenes were so repetitive I was tempted to skim through each time I encountered one.

In addition, the tale that most people associate with the Trojan War is the Trojan Horse. However, that does not occur in the oages of the Iliad. Nor do we see the death of Achilles. The tale ends rather abruptly with the funeral of Hector, and rhe audience is left to wonder at the fate of the Achilles and the two warring armies.
Of course, most of us know of the events that came after The Iliad; of how Achilles was pierced through the ankle by an arrow by Paris with the help of the archer-god Apollo. We know of how Aeneas, cousin of Hector, goes on to found the Italian people. We know of the fate of Hector's wife Andromache, and their newborn child.
Overall, The Iliad took effort to conquer. But I am glad to have read such an ancient piece of literature, and I fully intend to revisit this epic poem through a verse translation in future.