I made two aesthetic edits inspired by the book! You can find my bookstagram account here.

I was inspired to curate a collection of songs that remind me of Madeline Miller's novel, and as the title is The Song of Achilles, what could be more fitting? To illustrate the similarities between the songs and book, quotes from the songs will be in italic, while quotes from the book will be in bold.

The Ocean ~ The Bravery

"I climbed up a mountain, and looked off the edge
At all of the lives that I never have led
There's one where I stayed with you across the sea. . ."

This song relates to TSOA in many ways, the first of which is Thetis. Throughout the novel, Achilles' ocean nymph mother is determined to part her son from Patroclus. The line the ocean rolls us away to me speaks of Thetis' interference in Achilles and Patroclus' lives. In addition, the song reflects Briseis' fate as well—how she braved the waves rather than face Pyrrhus' tyranny.

"We were tight knit boys
Brothers in more than name
You would kill for me
And knew that I'd do the same. . ."

The song speaks of back when we were kids, which recalls the happy times that Patroclus and Achilles shared when they were younger. There is a line in the song that tells of someone's faults, then goes on to say but you were always gold to me, which draws a parallel to Achilles' hubris and how Patroclus becomes somewhat disillusioned with his love's stubborn dedication to his honour. 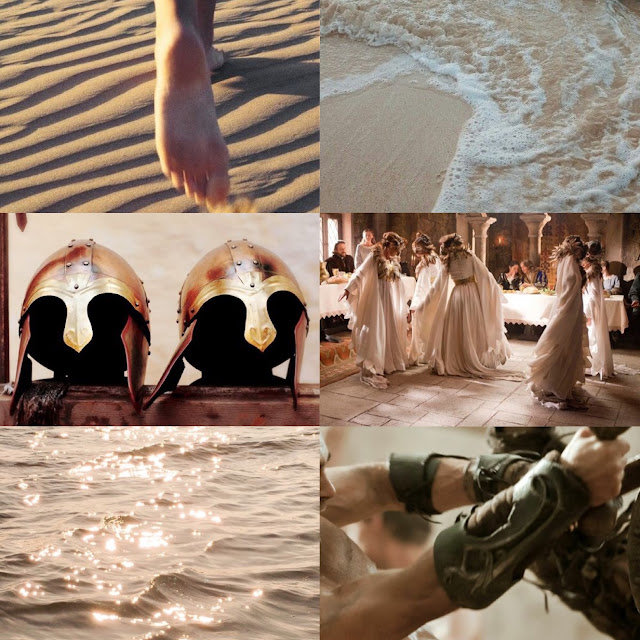 "If you must leave,
Leave as if fire burns under your feet
If you must die, sweetheart
Die knowing your life was my life's best part. . ."

The song's words about leaving remind me of when Patroclus dons Achilles' armour—there is an overwhelming sense of unspoken sadness and impending peril in the moment, which I think is captured in this song.

If you must die, remember your life. . .

This line is strongly reminiscent of the final moments of the book: "I am made of memories. . . they do not come as words, but as dreams." Patroclus shares with Thetis his memories of Achilles, and this song captures that remembrance in a way that feels true to their story.

I Will Follow You Into The Dark ~ Death Cab for Cutie

"Love of mine, some day you will die
But I'll be close behind
I'll follow you into the dark. . ."

This song reminds me of the love and loyalty between Achilles and Patroclus. Achilles' words, "If you have to go, I will go with you," are startlingly similar to the lines of this song. It makes me think of Thetis' words to Patroclus about his mortality, of Patroclus and Achilles' fates. The song speaks of No blinding light or tunnels to gates of white / Just our hands clasped so tight, which closely parallel the final lines of the book.