Following this year's release of the fourth and final book in the Raven Cycle series, I wanted to write a review to wrap up the series as a whole! (Note: I only own the first three books in the series, as I listened to the fourth book, The Raven King, on audiobook.) 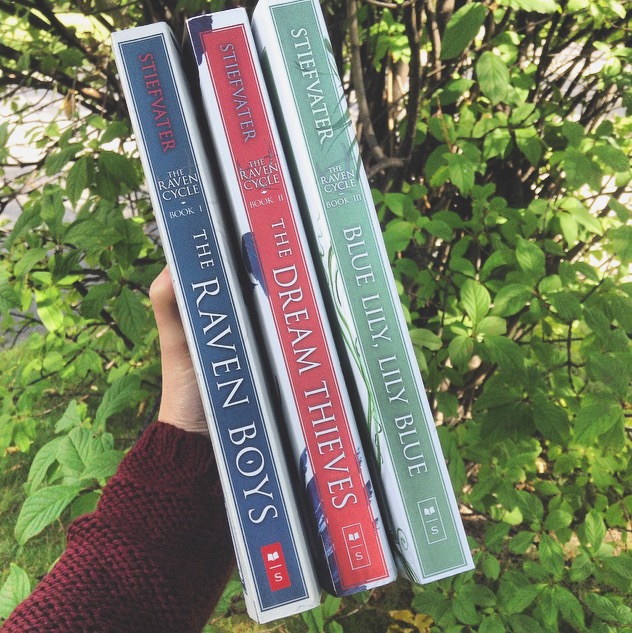 Blue Sargent is a girl as unusual as her name. In a house of psychics and seers, she is the only one incapable of communing with spirits and sensing the beyond. All her life, she has been told that to kiss her true love will be to kill him. There are only two reasons a non-seer would encounter a spirit on St. Marks eve, when it's possible for psychics to see the spirits of those who are fated to die in the coming year. Either you are the spirits' true love—or you killed them. When Blue sees the spirit of a Raven Boy, a wealthy student of Aglionby Academy, she's left wondering which reason is true for her.

The last few years of Gansey's life have been dedicated to finding Glendower, an ancient welsh king who, according to legend, will grant a wish to the one who wakes him. Gansey has amassed a group of friends to aid in his quest—Noah Czerny, Ronan Lynch, and Adam Parrish.

When Blue and Gansey's paths cross, she is irrevocably drawn into the world of the Raven Boys. But in the Virginia town of Henrietta, where they dwell, darkness is brewing. Something bigger than Gansey and his quest for Glendower, bigger than Blue and her doomed true love.

Though there is romance in the series, the main focus is on friendship, and the struggles that each character faces. The romances occurring between characters were not driving forces behind the plot, but rather woven into the background of the story. Despite being a fantasy series, all the characters were very lifelike and human—even the not-so-human ones.

This series is steeped in strangeness and mystique. Even as you read it, you find yourself wondering what exactly it is about, as there are so many different facets to the story. Truly, I am incapable of doing it justice by my short description, as the series encompasses both ancient legends and modern struggles, fantasy realms and present-day venues.

These books are unlike any other young adult series I've read. Maggie Stiefvater's writing style is so lyrical, the words like a dance. The story itself is strange and enthralling, with a plot so imaginative and eerie that it will surprise even the most seasoned of readers. There is so much occurring in the series that I can definitely see myself rereading it to gain fresh perspective.

This series is suited to older teens, as there is more swearing and drug references than are commonly seen in most young adult books. For readers looking for a truly unique series, the Raven Cycle—with its ancient lore, simple truth and poetic prose—will offer an experience unlike any other story.

You can get your copy of the first book at Chapters, Amazon, or for American readers, Barnes & Noble.